Are you accept this?
Yes No
Because of the COVID-19 there are delays, in our warehouse and and during transport of the packages. COVID-19 FAQ
Your shopping cart is empty
Proceed to Checkout
Home
/
Blog
/
Did you know these celebrities experimented with psychedelics?

Did you know these celebrities experimented with psychedelics? 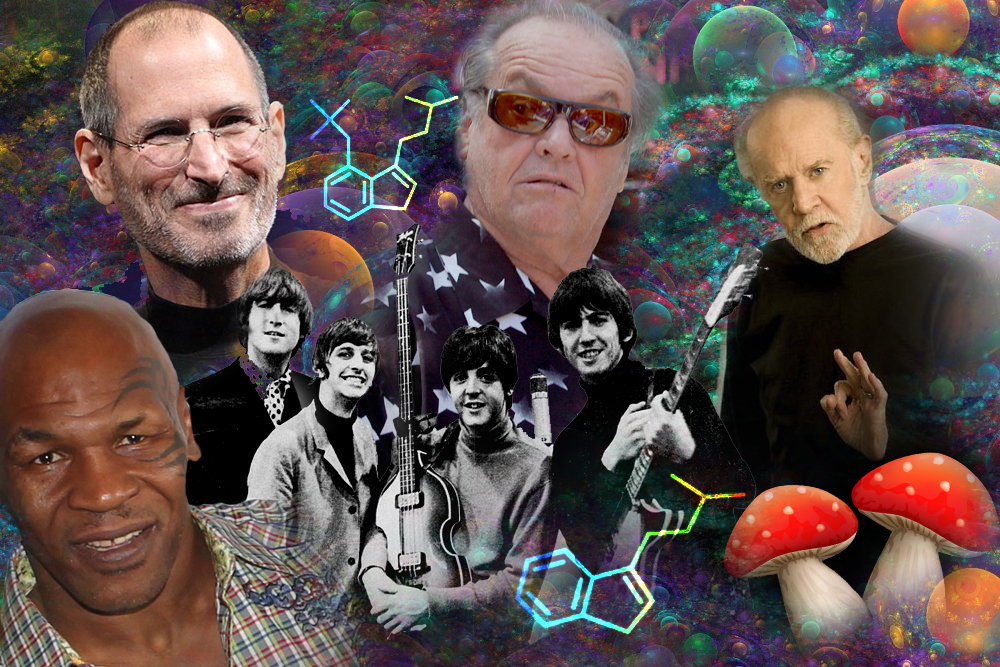 Psychedelic substances are becoming more popular by the day. The fact that you are reading this on Avalon Magic Plants already increases the chance that you have ever experienced psychedelics like magic mushrooms, ayahuasca or LSD yourself. But did you know we have some psychedelic-loving allies in celebrity-world? Most celebs and Hollywood-stars stay on the background about their use of these magical products, but luckily there are some who have spoken out about their sometimes life-changing experiences. What do you think about these people below?!

American neuroscientist and profound spokesperson of new atheism Sam Harris has some pretty good words to say about psychedelics. He experimented with some himself, as he says in one of his writings. “I have visited both extremes on the psychedelic continuum. The positive experiences were more sublime than I could have ever imagined or than I can now faithfully recall. These chemicals disclose layers of beauty that art is powerless to capture and for which the beauty of Nature herself is a mere simulacrum. It is one thing to be awestruck by the sight of a giant redwood and to be amazed at the details of its history and underlying biology. It is quite another to spend an apparent eternity in egoless communion with it. Positive psychedelic experiences often reveal how wondrously at ease in the universe a human being can be—and for most of us, normal waking consciousness does not offer so much as a glimmer of these deeper possibilities.”

With over 60 movie awards and 3 Oscars, Jack Nicholson doesn’t need an introduction. But did you know this actor used LSD while writing the script for the movie ‘The Trip’? “I don’t advocate anything for anybody. But I choose always to be candid because I don’t like the closet atmosphere of drugging. In other words, it ain’t no big thing. You can wreck yourself with it, but Christ, you can wreck yourself with anything”, he once said about drug use. It’s reported he used drugs to inspire creativity with his acting and writing. Being stoned has helped me creatively [with] writing. It’s easier to entertain yourself mentally.”

62-year-old actress Frances McDormand is known for numerous movies and tv-series, including Fargo, Three Billboards Outside Ebbing, Missouri, and 65 other Hollywood titles. She has spoken multiple times about her experience with psychedelic drugs. "I really, really enjoyed LSD. And I really enjoyed mushrooms very much. It’s unfortunate, I think, that drugs were not handled properly. Politically, they’ve been used to separate the economic classes. Thankfully, it’s all getting fixed now with the marijuana laws. But with LSD, because it was countercultural, and because it was used as an experimental drug, it was not marketed properly. It if had been marketed properly, we would have it.... We needed a PR person for that LSD! It was very profound. Very profound."

"It's not going to solve all your problems," Susan Sarandon said about her thoughts on LSD. "But, yes, I'm totally supportive of that means to reframe your universe." Thelma & Louise star Susan Sarandon is another avid psychedelic user. The American actress is known for her roles in many films and series, including Dead Man Walking, Ray Donovan and Cloud Atlas. During an interview the actress told about her experience with ayahuasca and magic mushrooms. "I'm not new to the idea of mushrooms. I don't really like chemical things, really. Timothy Leary was a friend of mine, so that acid was nice and pure, but I'm not really looking for chemicals, and I don't like to feel speedy. But I've done Ayahuasca and I've done mushrooms and things like that. But I like those drugs in the outdoors -- I'm not a city-tripper."

In an earlier blog we reported how 5-MeO-DMT from a toads venom was responsible for some live-changing events for Mike Tyson. During several interviews, Tyson talks about his transformation and how 5-MeO-DMT helped him change his view on his life and on the world. "I came across this, this medicine or drug, whatever you want to call it, and I've never been the same," Tyson told Joe Rogan, noting that his experience was something like dying and being reborn. He added that the effect of DMT is inconceivable and has no words to explain it: "It's like dying, you are humble, vulnerable and at the same time invincible”. In another interview with ESPN, the famous boxer says it has had great effects on his thinking abilities. “I smoked it and everything went ... boom! It killed my ego, my life changed completely”

The now deceased George Carlin (Oh how we miss his shows!) was and is still world famous as a stand-up comedian. His act "Seven Words You Can Never Say on Television” is probably one of his highlights. Carlin once reported using several types of psychedelics. "I did LSD and peyote in the late 1960s, before I came in contact with cocaine. And those drugs served their purpose. They helped me open me up. You know, if a drug delivers anything at all, it has to be self-limiting. It should tell you when you've had enough. LSD and peyote were that for me."

He might just have been one of the most famous psychedelics users: Steve Jobs. The now deceased tech giant told several media outlets he regularly took LSD at the start of their career together with Apple co-founder Steve Wozniak. This is what he said about it: “Taking LSD was a profound experience, one of the most important things in my life. LSD shows you that there’s another side to the coin, and you can’t remember it when it wears off, but you know it. It reinforced my sense of what was important—creating great things instead of making money, putting things back into the stream of history and of human consciousness as much as I could.”

There probably isn’t a group of artists that benefited more from psychedelic experiments as much as The Beatles. But it was even more than that: LSD might have been the reason they even continued performing at some point. "John and I had decided that Paul and Ringo had to have acid, because we couldn't relate to them any more. Not just on the one level - we couldn't relate to them on any level, because acid had changed us so much. It was such a mammoth experience that it was unexplainable: it was something that had to be experienced, because you could spend the rest of your life trying to explain what it made you feel and think”, George Harrison said.